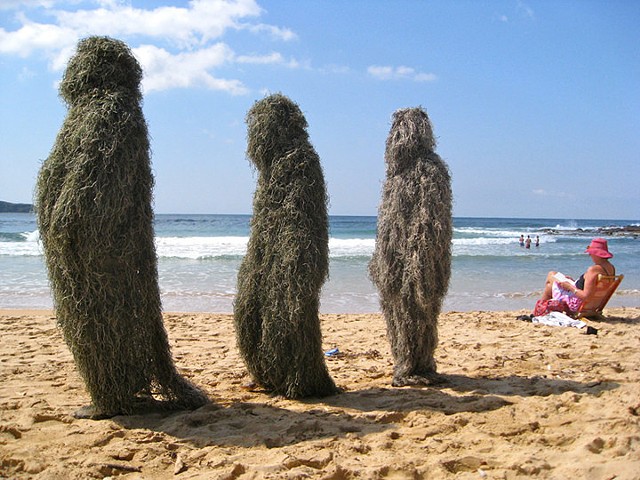 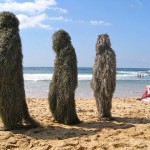 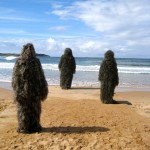 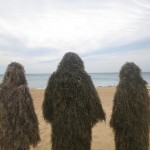 This performance continues my exploration through public performance of waking up the subconscious of viewers through actions of absurdity. In the spirit of social change, this performance paid homage to the Hundredth Monkey Theory. The idea, known in its popular form as a parable, was put forth by researchers Lawrence Blair and Lyall Watson to describe the “tipping point” at which the hundredth monkey on an island had learned to wash and eat sweet potatoes. The behavior reportedly spread through collective consciousness to the entire group, and even spontaneously leapt across the sea to groups of monkeys on other islands and the mainland. The Hundredth Monkey Theory represents the critical mass necessary to transform the invisible field, which regulates the behavior of an entire species.

For these site-specific durational performances on the Northern beaches of Sydney, ghillie suits that are used by hunters and for military tactical operations were appropriated to create three costumed characters. By wearing the costume we were immediately concealed and placed in a position removed from the public’s ongoing daily routines. This vantage point gave us the ability to ‘listen in’ as if in a dream-like state visiting the earthly human reality. The public carried on as though there was no one inside the costume and we could overhear intimate exchanges with passersby and onlookers. We walked extremely slowly from point of origin to point of destination. It took hours to travel a few hundred yards and viewers could not discern movement. Once in place we stood still for another few hours. Never speaking we would communicate using wild boar callers until the equally long return trip to our point of origin.

I was interested in decontextualizing these suits intended for deadly force. The intention was to create a hybrid visual that blurred the line of human, animal, and plant – an unknown entity.
I wanted the viewer to ask:
1) Who are they?
2) What is their story?
3) Is there someone inside?
4) Can they see me?
5) How do I react?

The performances were created out of a workshop at Eramboo Artists Environment for performances in Dee Why and Manly.