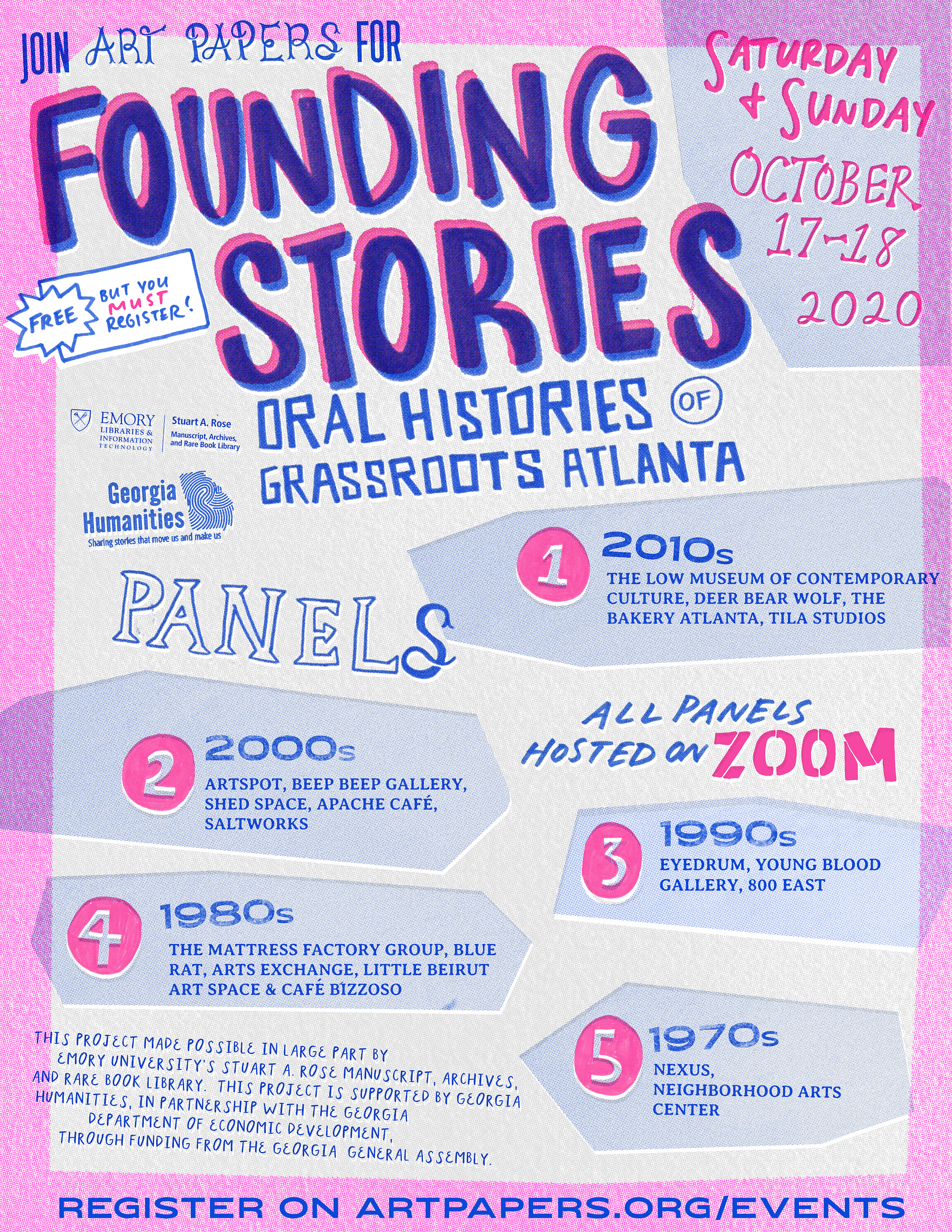 “Founding Stories: Oral Histories of Grassroots Atlanta” was a decade-by-decade series of panel discussions exploring the founding stories of a selection of Atlanta’s DIY, grassroots, and artist-run spaces.

In five panels held during the weekend of October 17-18, founders of some of Atlanta’s most beloved spaces spoke about how these organizations came into existence. Answering questions such as: What were the conditions that led to the founding of the space/project/organization? What was happening in Atlanta at that time? What goals did you set out to accomplish, and did you feel those goals were met? What can the current field of artist-run initiatives learn from this history?

Each talk was moderated by a member of the community who experienced the initiative’s activities first-hand, and in several cases, who operated/participated in similar concurrent projects.

In this dossier, you can find closed-captioned videos of each panel and archival photographs of the featured spaces. Full transcripts will be made available in the coming weeks.

After the final panel, which featured moderator Dr. Candy Tate and panelists Chip Simone and Michael Lomax discussing the Atlanta art scene of the 1970s, Art Papers Editor + Artistic Director Sarah Higgins gave closing remarks. In her final comments, Higgins considered and synthesized several main ideas that emerged over the two day symposium. We have transcribed her closing remarks—edited for clarity—and published them below.

I’ve appeared here at the end to primarily thank you: Michael, Chip, and Candy. This final panel has been monumental—I feel edified and energized. It’s been a significant ending to what have all been interesting and insightful panels. I’m happy that we chose to go back in time because we’ve arrived at such a wealth of perspective by ending here. We’ve also arrived at our own beginning—the destination of our own birth, as Art Papers is also a child of the 70s—founded in 1977—so we’re on this panel in spirit. I want to offer just a few closing thoughts in response to the overall conversation that’s been happening.

First, I want to acknowledge that this series has only been a selection of the many grassroots, artist-run, and DIY spaces that have existed and enriched Atlanta’s art community over the years. We knew that it would have to be a sampling, limited by our own time here with an audience, as well as by the availability and time of others. Founding Stories has been a year and a half in the making, and it was derailed a bit by the challenges of 2020. We’re very grateful for all of you who decided to brave a Zoom symposium, whether on the panels or in the audience.

I want to highlight a few ideas that emerged across the five conversations, in the hopes of synthesizing a few things. One phrase that caught my ear early on was “beautiful chaos,” which Rachel Pomberg first spoke about in reference to Eyedrum’s early times, and it was echoed by Jeff Mather in speaking about The Mattress Factory Group. This phrase encapsulates how it can feel for a small group of people to take on a project that is bigger than themselves, a bit unwieldy, or that becomes so over time, while also taking on the expectations of others, and the pressures of sustainability. Beautiful chaos seems to capture the spirit of many of these projects.

Another notion that came up was risk. The risk that folks took to start something new, to put themselves out there for their community, and even more crucially, to create opportunities for others to take risks. This gesture has been central to how meaningful and valuable many of these spaces and projects have been to the community over the years.

Space was also a concept that appeared throughout the conversations. Space came up as an opportunity, a prompt, an investigation, and maybe most crucially as a fraught resource, one that is wrapped up in real estate, economics, and with city planning and development. We discussed the difficulty that artists feel in taking opportunities for access to space when they know that what they do in that space can be mobilized towards gentrification, towards displacement, while grappling with the reality that they have few opportunities outside of such times and places to occupy and use space. Those questions—of space as a resource that can lead to complicity with destructive forces after the fact—recurred and are very salient for our moment.

We touched on the question of sustainability. How do we enable these kinds of spaces to continue, and to grow? Why can’t we always keep them? Why don’t we have them all, still here with us? These sustainability questions had a lot of different answers, but one thing that became apparent was that sometimes things run their course. Sometimes institutionalizing, or becoming a more formal institution, would mean losing something at the core of what these spaces embody, leading to issues around loss of independence. The independence to be unafraid, to take those risks, to not be beholden to a funder or to a structure.

Meredith Kooi reprised Alice Lovelace’s wonderful observation from the 1980s panel, that we do these things in service to our communities. A community that, really centrally, people repeatedly observed as being uniquely Atlanta, with its own set of distinctive particularities. Many spaces addressed community from a desire to create a place to break down the either racially or economically segregated nature of larger institutional spaces by bringing people together across racial and disciplinary divides, and undoing those spaces of separation that they saw in the larger institutional space of Atlanta. Many did so successfully.

Finally, we witnessed the importance of collaboration, especially across disciplines and spaces that are perhaps more siloed in today’s communities. In each panel—even the 2010s—collaboration across disciplines was central to at least one, but usually more than one of the spaces. Going to Arts Exchange, Café Bizzoso, or Little Beirut in the 80s, and Eyedrum in the 90s, was an inherently interdisciplinary experience. These were spaces of music, writing, performance, visual arts in an exhibition-making sense, and in a community-engaged, educational sense. Apache Café in the 2000s is a wonderful example of a wholistic space of poetry, writing, visual art, music—and similarly, The Bakery in the 2010s is a great case-study in interdisciplinary DIY spaces. We heard the impression that these things have become more fractured—that they now occupy their own enclosed spaces—but we also heard proof that these cross-disciplinary collaborations do continue to exist, and a thread … connected … all of them, today and yesterday.

I want to again thank our panelists—on this panel, and on all of those that went before. To our moderators, who are incredibly engaged and did a wonderful job, and to Meredith Kooi, who kicked this entire series off through her own explorations of people’s most beloved DIY and grassroots spaces, and for shepherding this project through to completion.